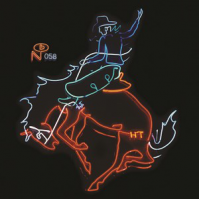 As progenitor and contemptuous poster boy for the music that came to be Cosmic American, Gram Parsons found himself mired in a recording career spent mostly in scouting the perimeters of chart success. “He hated country-rock,” Parsons collaborator Emmylou Harris would later reflect. “He thought that bands like the Eagles were pretty much missing the point.”
Parsons had been orbiting the idea of Cosmic American Music for some time. In ‘68, he’d parted ways with the Byrds and was looking to take air with a new project. “It’s basically a Southern soul group playing country and gospel-oriented music with a steel guitar” he told Melody Maker, on the subject of The Flying Burrito Brothers. So it was that when A&M’s Burrito Brothers debut The Gilded Palace of Sin made it to shelves in February of 1969, early adherents to the Cosmic American gospel were already echoing its message from areas flanking Gram Parsons’ Southern California hills and canyons.
There was F.J. McMahon in coastal Santa Barbara, Mistress Mary further inland in Hacienda Heights, and Plain Jane of Albuquerque, New Mexico, each responding by committing their own private readings to tape before for day one of the 1970s. Parsons himself might’ve disdained them, had he even been aware of such minor ripples, shimmering at the edges of his desert oasis. But these were true believers all the same, given over fully to his roots music concept, each filling vinyl grooves with non-rock instrumentation like fiddle, banjo, and pedal steel guitar, the last undoubtedly Cosmic American Music’s most distinguishing stringed signifier. Only too predictably, big labels did the grunt work of confining and defining the movement, as ABC, United Artists, RCA, and more played catch-up with Asylum’s raptor rock juggernaut, via backwoods crossover also-rans with names like Gladstone, American Flyer, and Silverado. Twang reigned, the shitkickers kicked shit, and the vaguely western-sounding guitar records piled up. Country-rock became “the dominant American rock style of the 1970s,” as Peter Doggett’s comprehensive Are You Ready for the Country put it much later. Wayfaring Strangers: Cosmic American Music picks up and dusts off golden ingots from the dollar-bin detritus of that domination, to reconstruct events as seen from the genre’s real Wild West—America’s one-off private press label substructure.