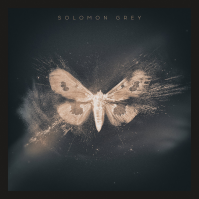 The release of Solomon Grey#s self-titled debut album is a milestone on a fifteen-year journey which has taken the band from the UK, to Ireland, Australia and now back home to London. Released by Decca Records the album is a collection of alternative electronic pop songs that serve as the soundtrack to a journey of persistence and determination by musicians and composers Tom Kingston and Joe Wilson. Solomon Grey#s Wilson and Kingston initially met playing in covers bands in Oxford before relocating to London. After a few years of writing together, it was only after writing #Last Century Man# that they felt they had a sound they could call their own. However, finding it hard to dedicate time to the project and with Tom now battling a severe illness the pair decided to pack up and relocate to a remote corner of County Cork, Ireland. Living beside the Atlantic Ocean, they began many of the songs that form the basis of this debut LP, including #Gascarene Sound# and #Choir To The Wild.# It sounds idyllic but the isolation was deafening and with Tom#s illness worsening, their stay was cut short. Shortly afterwards a family bereavement uprooted Tom permanently to the Australian outback. Determined to continue the project they had started, Joe joined him in the rural isolation of New South Wales. As Tom slowly recovered his health, new songs such as #Electric Baby#, #Epitaph# and first single from the record #Sweet 84# took on new meanings reflecting on the lives they had left behind. Production on the tracks was refined from listening back to mixes whilst driving along the long straight roads at night. At the tail end of 2012 Solomon Grey returned to London to show the world their music. With a fantastic initial reaction it wasn#t long before the TV and Film world took notice and commissioned the band to write for a variety of projects including BBC/HBO#s The Casual Vacancy with the music released as part of a collection of their work to date on their #Selected Works# compilation. The duo continued to write, adding #See You There#, #Broken Light# and #The Rift# to complete the record. It is an emotive, somatic and diverse body of work that encapsulates the journey and transformation undertaken by Tom Kingston and Joe Wilson. With the metamorphosis now complete the eponymous LP marks the first chapter in the story of Solomon Grey.