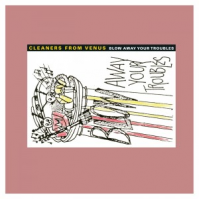 Blow Away Your Troubles

Lol Elliot and Martin Newell, who together formed the legendary lo-fi band The Cleaners From Venus met in the small town of Wivenhoe, southeast England at the turn of 1980s. Newell, a rock ringer and part-time kitchen porter who'd left his band the previous summer, and Elliot, a drummer and former hippy traveler, had much in common. They shared a love of sunny 1960s pop music, punk rock and musical comedy. Neither Elliot nor Newell cared much for any kind of musical rule book, bother were dismayed by the new right-wing politics which had taken over their country. Both were in their twenties, had time on their hands and were keen to create something new.
The Cleaners From Venus became one of the most influential bands of the early 80s. Blow Away Your Troubles was originally released in 1981 and only offered on cassette until now. The influential album has been completely remastered and on vinyl for the first time. This release offers a new way to listen to this important band like never before.