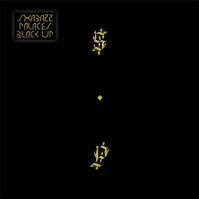 Black Up is the new sonic move from Shabazz Palaces. Like rich velvet hijabs or gold threaded abayas. Luxury as understood by the modest. Shabazz Palaces. If Bedouins herded beats instead of goats and settled in Seattle instead of the Atlas Mountains, this would be their album. Forward thinkers but nostalgic for a sparer time when ancient astronomers only recognized five planets. Hip hop. Black light uses electromagnetic radiation to eradicate microorganisms, but shabazz didn’t come to kill a sound, just to shine their own incandescent lamp on this. Hear. Hard and clear. Fifty thousand years in the making. Honorable.—palaceer pink gators. Produced by Knife Knights.plcrs at Gunbeat Serenade Studio in Outplace Palacelands. It was recorded and mixed in Lixx-alog by Blood.