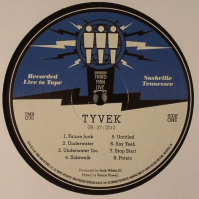 18 tracks of primo punk rock from Tyvek, recorded on 27th september 2010. "Theres a weird intensity to even
the most slacked-out of these songs, a sense of impending doom even as singer Boyer mouths tuneless la la las
and the bass and drums build underneath. Confined rhythms the sing-song beat of penultimate cut What To
Do for instance imply a need to escape. Drawling mantras, repeated endlessly, point toward a willingness to
tune out. But every once in a while, usually through some sort of guitar experiment, the boxy confines of these
songs open out into something spacious and really beautiful. It happens with the Doppler-whining flange late in
What To Do, and with the layers of feedback in the lovely, wistful Hey Una. Its part of this bands charm that
they can remind you of the Fall, the Urinals, Volcano Suns, the Observers and Television Personalities, all within
five minutes." DUSTED.