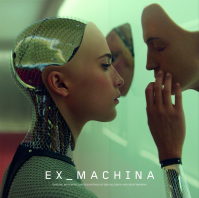 Ben Salisbury & Geoff Barrow join forces for a second time since their creation of DROKK, their unused score for 2012 motion picture DREDD, to create the dark, synth heavy score for EX MACHINA. EX MACHINA is the directorial debut of Alex Garland, the man behind 28 DAYS LATER and SUNSHINE. It stars a trio of rising stars - Oscar Isaac, Domhnall Gleeson, and Alicia Vikander, who portrays a robot built to test the boundaries between humans and machines. The film having been released earlier this year in the UK and the rest of Europe with a release date this month in the U.S has enjoyed rave reviews including Sight & Sound naming it their 'Film Of The Week' and the Guardian describing it as a 'dazzlingly good-looking technological thriller'. Speaking to Gigwise Geoff Barrow said, 'It's been great for Ben and I to be working with Alex again, and hopefully we have written the kind of score an intense sci-fi thriller like this needs' with Salisbury adding 'we wanted to slightly get away from the type of soundtrack album that has a huge track-list with lots of short cues. Instead, we've tried to put together an album of fuller length tracks, by segueing some of our cues and creating a structure and shape that mirrors the film in some way.' The EX MACHINA ORIGINAL MOTION PICTURE SOUNDTRACK will be released as a double CD and double vinyl which includes the 10 tracks included in the film and additional CD/LP of bonus material and cues .