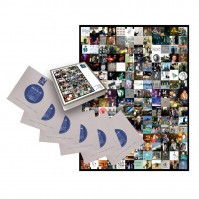 EDWYN COLLINS - TAPE BOX: 6 x seven inch singles in the AED tape box, five of the singles are tracks from Edwyn’s solo albums between the years 1989 –2001 (a mix of previous single releases and Edwyn’s favourites) plus a preview track from his next album, on course for release at the end of the year. This is Down The Line, and it’s coupled with a special demo version, the first time Edwyn worked the song out, with his son Will, on vocals and the two of them playing one guitar. Edwyn shapes the chords, Will strums. Too good not to share.

Exclusive to the box is a specially created 28” x 21” poster comprising a grid of 192 personal photos and images. Edwyn has long had a notion to ripoff the poster that came in The Faces album, A Nod’s As Good As A Wink, which hangs in his West Heath Studios. Here it is, resplendent.