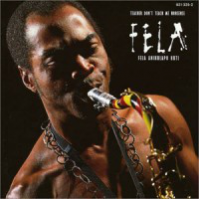 To escape persecution in his homeland, the 1980s saw Fela Kuti turn from an outspoken champion of the downtrodden to a reclusive, depressed and embattled soul whose muse seemed to have deserted him. Two failed attempts to join the presidential race in Nigeria also affected him deeply. He took his band and camp followers on exhaustive tours of Europe and the US, but good recordings were few and far between. This 1986 release was an exception.