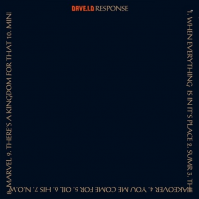 Berlin's !K7 label has often dipped its toes in electronically enhanced rock, most notably with groups like Stateless, The Rapture and Hot Chip. Dave I.D.'s debut album falls into this category as well. Entitled Response, the record continues in the vein of experimental electronic/rock hybrid established in his Gangs EP, which came out at the beginning of this year. According to a press release, it was recorded inside a 10-foot-by-10-foot wooden cube, which the UK-based artist describes as an "old art project, which has a multi-functional use. At present I call it 'Dave’s Studio.'"