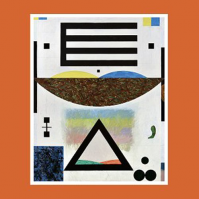 My dad left me his acoustic guitar in his will; it was all he had to give, because he wasn't a rich man. I wrote ten songs on it, and I think that was the real gift he gave me: a love of music, not just the way you all love it (music lovers), but also a love of creating it, sowing myself, in some small way, into the story of music.

I was holding the guitar a lot, kind of savouring it: a Martin D-18. I had been making records for a few years with a computer, piling tracks on tracks, writing words over guitar licks already recorded in a studio. I came to think of an acoustic guitar as somehow akin to a computer, only in the sense that they are both tools of transmission, both effective in their own way. An acoustic guitar is still, in 2015, a very effective way of transmitting one's songs. I made a deal with myself: write ten songs, write all the words before anyone gets to hear any of the songs, memorize the songs so that I become the hard-drive that the acoustic guitar accesses. I mostly, if not totally, kept to this deal, which is rare: I'm generally pretty easy on myself.

I wrote about Joseph Beuys, about B. Traven, about God and Abraham and Isaac, about my dad being addicted to speed when he was 17. I needed my crew and I found them. Three women: Melanie Campbell, my life-partner and long-time drummer, returned to the band after a hiatus. And my old friend Shyla Seller, an archivist and book designer who happens to also be a really precise and powerful piano player. And Terri Upton, who plays both stand-up bass, and electric bass.

I am a lucky person. And then we needed some more crew, and we found them: our old friend and colleague Spencer Krug, who wrote string parts over the songs. And then Jesse Zubot, who played every string part on the record in one 10-hour day. And John Paton, who plays saxophone. And Paul Rigby, who caught a taxi cab over with his pedal steel guitar. I wanted the following: Douglas Sirk strings, a noble spin on Corky's Debt to His Father, some Darkness on the Edge of Town vibes.