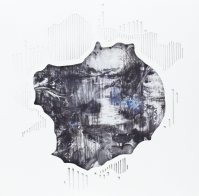 April 2013 will see Ukrainian pianist Lubomyr Melnyk the pioneer of Continuous Piano Music with his first release on UK label Erased Tapes. Entitled Corollaries, the album was recorded and produced by Peter Broderick with the additional help of Nils Frahm and Martyn Heyne. Erased Tapes founder Robert Raths knew it was time to share the great musical legacy of Melnyk, to which he simply responded: Where were you guys when I was thirty? The album artwork and design was created by American contemporary artist Gregory Euclide, known for his cover art for Bon Iver s self-titled album. Euclide was listening to early mixes of the recordings on repeat whilst painting the two visual counterparts contained in the record, describing his interpretation of Corollaries as 'a continuous cycle of growth and decay'.