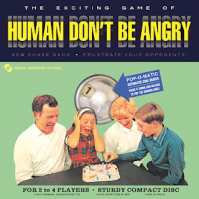 The first Human Don't Be Angry album is now finished and will be released through Chemikal Underground Records on the 16th April on CD & Download, with vinyl following shortly after on the 21st April. The vinyl version comes with a free CD copy of the album, although the CD version does not return this compliment.