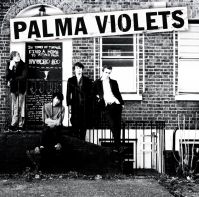 *** PREORDER THE ALBUM ON CD OR LP INSTORE OR ONLINE TO GET A FREE TICKET TO SEE THEM PERFORM A FULL LIVE SET AT RISE BRISTOL 26th FEBRUARY AT 6.30PM ***

*** WHEN YOU PREORDER THE ALBUM PLEASE CHOOSE PICK UP IN STORE AND YOU CAN COLLECT DAY OF THE GIG AND YOUR TICKET WILL BE RESERVED FOR YOU TO COLLECT AT THE SAME TIME! ***

This is the debut album from Palma Violets on Rough Trade. '180' was recorded in London at RAK Studios (produced by Steve Mackey), and also at the Lightship (produced by Rory Attwell). It's not often a band gets on the cover of NME when their debut single is still a fortnight away from release. It's even rarer that they live up to the excitement. Palma Violets operate somewhere between the two extremes of hype and heroism; dishing out an album that sounds half like a roguish and ramshackle 60's garage band and half blistering rock and roll. Every song has energy, power and presence. the album title '180' is the number of the Lambeth house that the four-piece have become known for regularly throwing parties and impromptu gigs for friends and fans in. For fans of the Modern Lovers, The Libertines and early Clash.