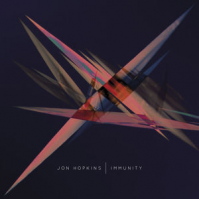 A powerful, multi-faceted beast, packed with the most aggressively dancefloor-focussed music Hopkins has ever made, Immunity is about achieving euphoric states through music. Inspired by the arc of an epic night out, the album peaks with Collider, a huge, apocalyptic, techno monster and dissolves with the quiet, heartbreakingly beautiful closer, Immunity, a track featuring vocals from King Creosote which could sit comfortably alongside the gems of their Mercury-nominated collaboration, Diamond Mine.

Immunity is a confident, dramatic record defined by an acute sense of physicality and place.â€¯It feels like the hypnotic accompaniment to a journey of creativity, a trip inside Hopkinsâ€™ mind, using analog synthesis alongside manipulations of physical, real-world sounds to make dance music that feels as natural and unforced as possible.