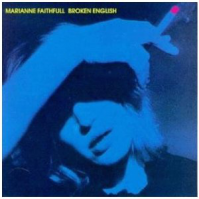 Marianne Faithfullâ€™s 1979 debut album for Island Records has now been remastered and expanded.

Disc One contains the original album as an Enhanced Disc which also features the short 12 minute film specially commissioned for the album release and directed by Derek Jarman. Itâ€™s basically three promotional videos for â€œWitches Songâ€, â€œThe Ballad of Lucy Jordanâ€ and â€œBroken Englishâ€ featuring unique footage of Marianne spliced together with stock footage and some of Derek Jarmanâ€™s trademark Super-8 film. This is the first time that this film has ever been commercially available.

Disc Two (Deluxe version only) contains the entire original mix of the album which was thought to have been lost but surfaced during the Tape Research for this Deluxe Edition. Also included are a re-record of â€œSister Morphineâ€ only previously available on the Marianne Faithfull anthology, Perfect Strangers and 4 Bonus Tracks in the form of the 7â€ and 12â€ mixes of â€œBroken Englishâ€ and â€œWhyâ€™d Ya Do It ?", which appear on CD for the very first time.