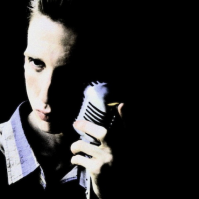 Parallax is a displacement in the apparent position of an object viewed along two different lines of sight. Bradford Coxâ€™s third album as Atlas Sound (a musical moniker heâ€™s used since he was ten) is all about this type of cosmic perspective. If you follow just one of the acoustic boundaries laid before you, thereâ€™s no telling how far it will take you down the rabbit hole. Any wave of modulated sound will either go on for eternity or come to a digital halt. These are some rather risky games to play with the listener on what is essentially a contemporary pop album. Fortunately weâ€™re rewarded with a harrowing sonic adventure that retains all the expected stark undertones with a greater penchant for incredibly lucid stream-of-consciousness.

If we hopped in a time machine and set the flux capacitor for 1992, thereâ€™s a very good chance this album would be packaged and sold as a dual-disc compilation. Half of the album consists of major key acoustic ballads, delicately laced with that spooky cool veneer. At the other end of the spectrum are more plaintive but equally impressive minor key tracks that push the envelope in more subtle fashion.