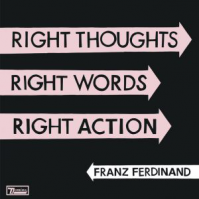 This exuberant, unencumbered record is the first from the Glasgow band since 2009â€™s Tonight. They seem to have rediscovered the imagination, vitality and fun found on their classic, era-encapsulating debut Franz Ferdinand.

Recorded over the last year at Kapranosâ€™s Scottish studio and McCarthyâ€™s Sausage Studios in London, the LP cements their status as a unique and adventurous British band: emboldened by a decadeâ€™s undreamt-of worldwide success, but still daring and defiant. Itâ€™s an ecstatic rejection of the drab conventions often accompanying that level of attention and expectation.

When asked for a quote, Kapranos came back with: â€œThe Intellect Vs The Soul, played out by some dumb band.â€* God knows what that means, but the lyrics do seem more poetic this time. There were a few interesting collaborations, but more of that laterâ€¦

The ten songs that make up Right Thoughts, Right Words, Right Action take what propelled Franz Ferdinand from the incestuous Glasgow Art School world to, well, the entire world - painterly lyrical detail, heavyweight hooks, precise aesthetic vision and that uncanny ability to marry arch artistic sensibility with pop punch â€“ and push it even further. The breadth of influence, musicality and invention on show here is enormous. If this is unmistakably a Franz Ferdinand record, it is as much by virtue of its sonic daring and perfectly patch-worked eclecticism as the timeless songwriting flair that has long been their calling card.

Franz Ferdinand are still Alex Kapranos, Nick McCarthy, Bob Hardy and Paul Thomson. Thereâ€™s still no one like them.