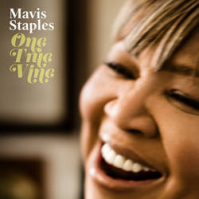 Soul / gospel legend, Rock and Roll Hall of Famer, and civil rights icon Mavis Staples releases her second collaboration with Wilco's Jeff Tweedy, 'One True Vine,' via Anti-. The follow-up to 2010's Grammy-winning 'You Are Not Alone,' 'One True Vine' finds Staples traversing darker terrain with stark, acoustic arrangements and the most honest, unvarnished vocal performances of her career. Featuring ten tracks--including new compositions written specifically for Staples by Tweedy and Nick Lowe along with covers ranging from Funkadelic to Low - the record is the most personal and emotional statement from the 'American treasure' (Chicago Tribune) yet. Recorded at The Loft, Wilco's studio in Chicago, the album features Jeff Tweedy on nearly every instrument except drums, which were played by Tweedy's 17-year-old son Spencer. From album opener 'Holy Ghost,' written by Low's Alan Sparhawk, to the new Tweedy composition 'Jesus Wept,' the gravity in Staples' voice is transfixing, heavy with burdens but blessed with the promise of true redemption that shines through on Nick Lowe's deft and driving 'Celestial Shores,' Funkadelic's 'Can You Get To That,' and Pops Staples' uplifting 'I Like The Things About Me.'
Vinyl with CD Version.