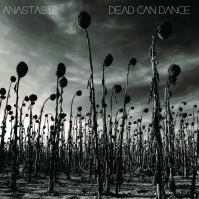 Anastasis is Dead Can Dances first slbum since 1996’s Spiritchaser.
“I thought ‘Anastasis’ was a good title given our reunion,” explains Brendan Perry, who, with Lisa Gerrard, formed the band in Melbourne, Australia in 1981, releasing seven studio albums, and one live album, before going their own ways after the last album. “’Anastasis’ also means ‘in between two stages’,” he adds. “Regeneration comes with the next season.”