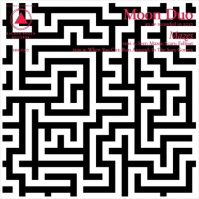 Moon Duo's earlier recordings reflected enough of guitarist/songwriter Ripley Johnson's other band, Wooden Shjips, to make his fans happy. Even if this two-person group â€” Johnson and organist Sanae Yamada â€” relied heavily on fixed rhythms since they didn't have a drummer, the guitars soloed and sprawled in hypnotic, free-form psych. The approach on Mazes is different, even if they keep some elementals intact. Check the title track, where Yamada's organ plays a lithe, sprightly pop melody and Johnson's guitar punches a trebly chord sequence adding heft. There's a cheap drum machine to keep the rhythm pulsing, acknowledging Krautrock's Motorik influence. Johnson's singing isn't buried in the mix the way it usually is; it's at the same level as the instruments, and the psych-pop melody governs the tune, even when he plays short solos between verses. The song drives and pushes and percolates. It's a got a bona fide hook and is relatively short. "Scars" follows it with less punch and a more laid-back, heartbeat rhythm; but once more, Johnson relies heavily on a pronounced melodic vamp as Yamada's organ shimmers and swoops around the foreground. His guitar is here, but it's hidden behind a Michael Rother-esque wall of effects. "When You Cut," with its handclaps and blasting two-chord jump, is a bona fide dance jam for psych heads. "Run Around' employs a shambling Bo Diddley shuffle in what feels like an update of "Who Do You Love." "In the Sun" sounds like ? and the Mysterians jamming with Suicide. That's not to say the spaced-out Moon Duo is gone. Opening cut "Seer" is organ-dominated, but Johnson's effects-laden lead guitar chugs in to open things up a bit. Likewise, "Fall Out" has a more complex guitar line at the foreground but eventually breaks apart and heads for the stratosphere, yet ends before it gets there Finally, "Goners," at 7:41, takes on the Stooges' nasty minimal riffing, adds a Motorik rhythm, and a John Cippolina-esque guitar solo to reflect a "traditional" Moon Duo jam. Mazes is all about songwriting growth, lyric melody, more elaborate textures, and accessible riffs. They underscore Moon Duo's heavy stuff and offer something refreshingly different in the process.