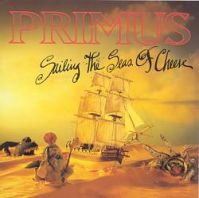 Sailing the Seas of Cheese

In a restoration personally overseen by Les Claypool, Primusâ€™ acclaimed â€˜Sailing The Seas Of Cheeseâ€™ has been newly mixed in stereo and Dolby 5.1 Surround for the first time since its 1991 debut for an expanded deluxe edition to be released May 21 by Universal Music Enterprises. The deluxe edition will feature the albumâ€™s new stereo mix on CD and the new 5.1 surround mix on Blu-ray or DVD, plus three exclusive, previously unreleased bonus tracks, including two live recordings from Primusâ€™ 2012 â€œ3D Tourâ€ and a Bassnectar Remix of â€œHere Come The Bastards.â€ A 200-gram vinyl LP to be released on the same date also features Claypoolâ€™s new stereo mix of the album. In a â€œMystery Vinylâ€ challenge for fans, 1000 unmarked, randomly selected copies will contain the new stereo mix on a yellow vinyl LP instead of black.