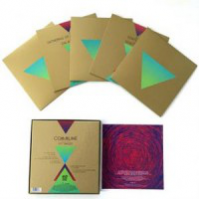 Goat return with Commune, the eagerly awaited follow up to their astonishing debut album World Music. Commune continues on with World Music's acidic grooves, hypnotic incantations, and serpentine guitar lines but also introduces a darker, more angry edge to the band, not seen before on previous releases. Starting with the layered percussive groove, Eastern guitar flourishes, and convoking vocals of "Talk To God", it re-establishes the trance-inducing rhythms and exotic blaze of guitar that characterized their debut so well.

That spellbound pulse delves into darker and more propulsive territories on "Words" and "Goatslaves", while "Goatchild" veers towards the transcendental pop of '60s Bay Area rock. The vintage psychedelic vibe permeates through songs like "The Light Within" and "To Travel The Path Unknown" - tracks that suggest that these rural Swedes operate on the same wavelength as the Turkish psych-folkies recently rediscovered by reissue labels like Finders Keepers. Commune reaches its apex when Goat's hymnal invocations meet a heavy doze of proto-metal fuzz on "Hide From The Sun" and "Gathering of Ancient Tribes".