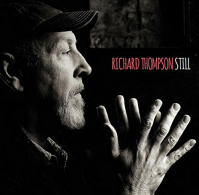 'Still' was recorded in a two-story rehearsal loft in Chicago over the course of just nine days with Wilco's Jeff Tweedy at the helm, backed by several longtime players from both Thompson's and Tweedy's bands. Thompson enlisted Tweedy's production skills in an effort to shake up his own creative approach to making records. "It turned out be really good idea," says Thompson. "Jeff is musically very sympathetic. Although some of his contributions are probably rather subtle to the listener's ear, they were really interesting and his suggestions were always very pertinent."
"I really tried to not have any preconceived ideas," Thompson says of working with Tweedy, "but of course you do. I tried to shove those to the back of my mind. You don't really know until you turn up — what the studio is like, what the gear is like. It ended up being a nice unfolding of surprises."

The key to Still's emotional resonance is a set of gripping new Thompson compositions rich with his signature mix of trenchant insight, gallows humour, and keen empathy for characters at the brink of being overcome by their emotions, their pasts, or themselves.

A recipient of BBC's Lifetime Achievement Award and Mojo's Les Paul Award, Richard Thompson was appointed Officer of the Order of the British Empire in the 2011 New Year Honours List. The Americana Music Association also recently honoured him with a Lifetime Achievement Award for Songwriting. Robert Plant, REM, Elvis Costello, Bonnie Raitt and many others have recorded Thompson's songs.

Taken as a whole, Still is a powerful dispatch from an acknowledged master who remains unafraid to put himself into demanding new environments – its title reflecting that resilience and seemingly endless resourcefulness. "Or," Thompson adds slyly, "it could be read as 'Is he still performing? I thought he died years ago."