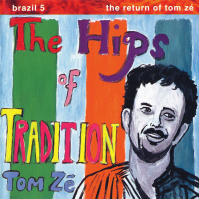 The Hips Of Tradition The Return Of Tom Ze

The amazing Tom Ze, or as he wrote to us when we were working on this album, “Should I change my name? It could be Ze Tom Ze? Or Tom Tom Ze?” This was his first newly recorded album after being ‘rediscovered’ and it’s as surprising and special as one would expect from this iconoclast. “Inspired by hard-lit and science fiction, Ze’s tick-tocking sambas and comforting cancaos range from the painfully touching to the instructably conceptual.”