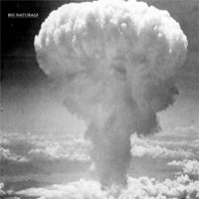 A two piece psych rock, punk noise band, Bristol based Big Naturals are comprised of Gareth Turner on bass and Jesse Webb on drums. This is their long awaited debut LP, a melting pot of mesmerizing grooves, combined with rabid punk energy and psychedelic noise scapes. Self titled, self recorded and self released on their own Greasy Trucker label. To trace the genesis of one of Bristol's most startling attention bands, one must begin at the circle in the square, Kings Square, Stokes Croft. The dark cavernous dwelling of epic Bristol band, the HEads, to which Gareth had, for many a year, acted as consort and advisor to, as both a studio engineer and general band oracle. The Heads and Big Naturals recorded together under the name "Rituals" and released 3 limited CDRs of their wild collaborations.

From this gruelling, primeval phase of sonic initiation, the Big Naturals emerged, now fully formed and fortified with their own musical vision. Many live shows followed, the bands' live set now a high energy onslaught of amped up fury, with startled onlookers describing the barrage as both hypnotic and pulverising. Utilising no less than three amp stacks for bass guitar and incorporating drones, space echo, phasers, mammoth thundering drums and some of the lairiest low end distortion to be heard currently in the UK, add some dememnted vocal outbursts and thats their sound... This is their 13 track debut LP, vinyl only, this is the second pressing of 200 copies on white vinyl, and comes in a "crass styled" wrap around, poster collage sleeve... fans of the Heads, Jello Biafra, NoMeansNo,and Skin Graft records take NOTE!