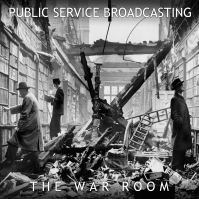 Granted unique access to propaganda films from WWII-era Britain by the BFI and setting them to new music, Public Service Broadcasting unveil ‘The War Room’. Expect breathtaking visuals, brooding synths and pounding drums as J. Willgoose, Esq and his drumming companion Wrigglesworth teach the lessons of the past through the music of the future. The first single from the mini album, Spitfire, received rave reviews and became a permanent fixture on BBC 6Music over May & June. It won the public vote for the Rebel Playlist before spending 5 weeks on the main daytime playlist, as well as being awarded Artrocker's Single of the Month. The second single ‘London Can Take It’ is unveiled this August. The title, visuals & samples for the Blitz-based banjo belter come from a film of the same name, filed by American correspondent Quentin Reynolds. The film was shown to audiences in the USA in order to shore up support for Britain and its allies. As the eye of the world is trained on London for the 2012 Olympic Games, this track reminds us of a time when the public had to endure more trying times than Olympic traffic lanes and a disrupted commute. The War Room is dedicated to J. Willgoose, Esq.'s great-uncle, George Willgoose, who died at the Battle of Dunkirk in 1940 aged 26. The War Room mini album was initially released on 28th May 2012 on Test Card Recordings as a limited edition run of 500 vinyl which sold out within 2 weeks via the band’s website. London Can Take It will be released on 13th August 2012 along with a full re-release of the The War Room mini album on CD and vinyl.