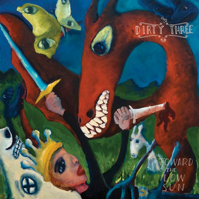 Toward The Low Sun

Toward the Low Sun came from difficult beginnings but you're unlikely to guess this from hearing it. It's a formidable album, taut and restless, brimming with confidence, ideas and ability. Still, according to Warren Ellis, there was a strong chance it might never have existed. Ellis recently told me that for a long time after their last album, 2005's Cinder, the band were unable to conjure anything in the studio that could spark their interests and match past glories, to the point where the Dirty Three came close to breaking up. “Nothing had come out of any new sessions that we'd done,” he said, “and certainly I was a little spooked by that. You know it felt like maybe this was the end of the group. Before this new record, it felt like that.” But with Toward The Low Sun, things took a brighter turn and now, with a much-anticipated tour of Australia beginning next month, there's not a snowball's chance in hell that Ellis, Turner and White will soon be winding things down. If this record is any indication, you’ll miss the forthcoming shows at your peril.