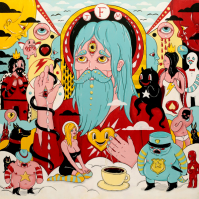 Weâ€™d like to introduce you to Father John Misty, the new project from Josh Tillman. Bella Union will release the album, â€˜Fear Funâ€˜, on April 30th 2012.

When discussing â€˜Father John Mistyâ€™, Tillman paraphrases Philip Roth: â€˜Itâ€™s all of me and none of me, if you canâ€™t see that, you wonâ€™t get itâ€™. What I call it is totally arbitrary, but I like the name. Youâ€™ve got to have a name. I never got to choose mine.â€

He goes on, â€œâ€˜People who make records are afforded this assumption by the culture that their music is coming from an exclusively personal place, but more often than not what you hear are actually the affectations of an â€˜alter-egoâ€™ or a cartoon of an emotionally heightened persona,â€ says Josh Tillman, who has been recording/releasing solo albums since 2003 and who recently left Seattleâ€™s Fleet Foxes after playing drums from 2008-2011. â€œThat kind of emotional quotient isnâ€™t sustainable if your concern is portraying a human-being made up of more than just chest-beating pathos. I see a lot of rampant, sexless, male-fantasy everywhere in the music around me. I didnâ€™t want any alter-egos, any vagaries, fantasy, escapism, any over-wrought sentimentality. I like humor and sex and mischief. So when you think about it, itâ€™s kind of mischievous to write about yourself in a plain-spoken, kind of explicitly obvious way and call it something like â€˜Mistyâ€™. I mean, I may as well have called it â€˜Steveâ€™.â€