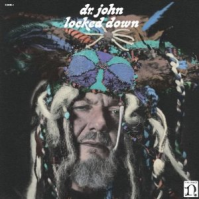 It’s an entirely new approach for the iconic Dr. John, featuring as it does his collaboration with Auerbach and a band of young musicians Auerbach hand-picked to make Locked Down at his studio Easy Eye Sound in Nashville. "It was way cool cutting this record with Dan and the crew he put together for it," says Rebennack. "It's reel HIP."

For his part, Auerbach says about the collaboration: "Mac inspired me every single day we were in the studio together: musically, spiritually, cosmically ... something special seemed to be happening and everyone involved could sense it. For my money, Mac's one of the greatest who ever was and who ever will be ... I'm so honored to have had this opportunity to work with him."

Auerbach, a long-time fan of the influential musician, dubbed “the Night Tripper” in the late 60s, visited Dr. John late in 2010 in his hometown New Orleans, announcing his ambition to produce "the best record you've made in a long time." Rebennack replied that he had done his research—his children had told him good things about The Black Keys—and the conversation led to an agreement to collaborate on the 2011 Bonnaroo Jam being curated by Auerbach.

That performance—called by New York Times critic Ben Ratliff in his best-of-the-year list “deep and oozy, close-to-the-vest, low-frequency funk”—confirmed that something unusual was taking place and led to September recording sessions in Nashville. Dr. John returned to Nashville at Thanksgiving to complete the vocals and Locked Down was mixed by Auerbach and completed in early 2012.