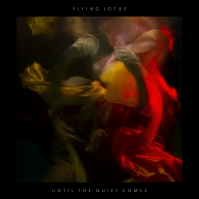 Until The Quiet Comes

Flying Lotus has scheduled the release of 'Until The Quiet Comes', the long awaited follow-up to 2010's Cosmogramma and his third on Warp Records, for a worldwide release on October 1st.

Composed, according to Flying Lotus, as “a collage of mystical states, dreams, sleep and lullabies”, Until the Quiet Comes has the distinct feel of this nocturnal trip. From the twitching descent into a subconscious state and the out-of-focus time-ether of the journey that follows, the sound is an unhinged, yet elegant evolution of the melodic and rhythmic interplay that is woven into the DNA of Flying Lotus’ aural personae.

All this stylistic mingling and genre-melting has contributed significantly to shift music in a direction that makes intellectual leaps without forsaking the all-important heft of a bassline or unimpeded ‘swing’ of a drum beat - the same way so many masters of soul music have infused their songs for lovers and dancers with brilliant and heady subtext for decades. Until The Quiet Comes follows this tradition while clearing a path distinctly it’s own, which is a mark of a classic.

The album sees longtime FlyLo muses Niki Randa and Laura Darlington return, as well as Thom Yorke, Thundercat and the inimitable queen of leftfield R&B herself, Erykah Badu, whose turn on the epic rumble of ‘See Thru To U’ is one of many highlights.