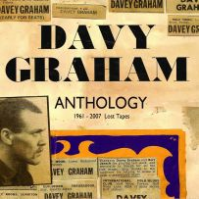 This collection reveals the private and public musician, and includes the first recording of “Anji” from a reel to tape machine as captured by Len Partridge in 1961. This tape is “THE” tape that revealed Graham’s style to Bert Jansch in Edinburgh long before Davy appeared on Vinyl. It also showcases Davy as a hardworking musician playing incendiary blues and fusion to folk-club audiences in 1966 and features recordings that demonstrate Graham’s eclectic and developing repertoires, as he grew older.

Davy Graham is without doubt the undisputed guitar hero of British folk-blues clubs. Revered by other musicians for his remarkable and wildly inventive playing, Graham dominated the acoustic scene in the early and mid-1960s with performances that were, for the period, startling and unique.

Martin Carthy described him as “an extraordinary, dedicated player, the one everyone followed and watched – I couldn't believe anyone could play like that”; while the late Bert Jansch said he was “courageous and controversial – he never followed the rules. He's my absolute hero, always will be.”

Graham remains a true hero to the British folk scene and world music at large. His pioneering techniques and influence has resulted in some of the greatest pieces of guitar-based music being created. Davy Graham is the ‘unsung hero’ of British Music and long will he remain a pervasive and inescapable influence upon it.