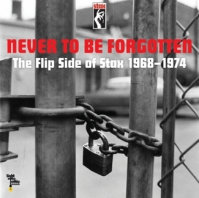 Lavishly Packaged Love Letter To The Final Years Of Stax!

Stax Records was black and white coming together in a pioneering integrated music enterprise. Native Tennessean Jim Stewart founded Satellite in the late 1950s but soon joined up with sister Estelle Axton and rechristened the label Stax Records (the “St” and “ax” of Stax respectively). This ever-evolving Memphis-based label became one of the landmark touchstones of soul, R&B, and funk throughout the 1960s and 70s, its finger snapping logo brand synonymous with sonic quality and heartfelt integrity. Releasing hundreds of long players and 45-rpm singles during its heyday, the imprint and its many subsidiaries also birthed the legendary careers of Booker T & The M.G.’s, Otis Redding, and Isaac Hayes.

Never To Be Forgotten: The Flip Side Of Stax 1968-1974 is Light In The Attic’s Record Store Day 2012 love letter to some of the lesser-known Stax Records artists, collected and presented in a knock-out 7” vinyl box set. Containing 10 faithfully reproduced 45-rpm singles from Mable John, Bernie Hayes, Lee Sain, Melvin Van Peebles, Roy Lee Johnson & The Villagers, and John Gary Williams, in addition to label stalwarts Johnnie Taylor, Mad Lads, Emotions, and Rufus Thomas, prepare to move, groove, and be enthused. Never To Be Forgotten comes housed in a beautiful flip-top container case replete with an extensive 84-page bounded booklet brimming with informative interviews with the surviving musicians contained within and liner notes by Memphis writer Andria Lisle, candid photographs, and personal anecdotes from Stax enthusiasts and label veterans Stewart, co-owner Al Bell, and promotions manager Phillip Rauls. Plus, a free Download Card for those turntable-less moments.

While Stax met a dramatic and disappointing fate in a tangled web of business, politics and finance in 1975, its enduring legacy shines on as one of the all-time great record labels. If industry competitor Motown billed itself as “The Sound Of Young America,” then Stax certainly earned each and every letter of its namesake “Soulsville U.S.A.” Though both labels brought black music to the United States and the rest of the world, Stax’s underdog status combined with a deep catalogue of the most life affirming and authentic sounds around shall retain a special place in our hearts, never to be forgotten.