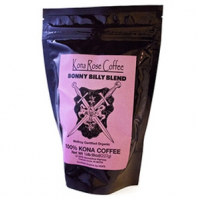 Will Oldham (aka Bonnie ‘Prince’ Billy) is known for his lengthy discography of folksy Americana, but he has just launched a project about something else that he loves. Oldham has released Bonnie Billy Blend Kona Roast, a coffee available through Drag City.

He originally thought of the idea when he met workers from Kona Coffee in Hawaii, who helped him create the organic coffee. The coffee is described as “overtones of chocolate, leather and non-wacky tobaccy.”