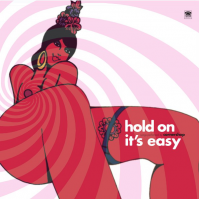 Hold On It's Easy

In 1993 Cornershop went into the studio to record their first album proper. Given the praise the album is getting now, especially in America, it’s hard to believe the group had to dispense with the producer half way through, but with the financial restraints of being based on a small label in the basement of the Rough Trade Record Shop off Portobello Road they had to persevere to get it finished. This was the Riot Grrrl era and Cornershop were the only all male band to be a part of it. With a few chords and a bag of political spanners they managed to create a standpoint of the UK as getting on the verge of getting it on – a lesson that went unheeded to its peril. The variety of melodies in this instrumental update is testament to the strength of sound and originality of vision which made ‘Hold On It Hurts’ a main contender of Cornershop’s back catalogue to be presented in a chiffon-swinging stride. Version.

Sit back and let life that can be difficult and at times hurt, become something that is instrumentally an easy listen.