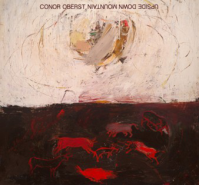 Upside Down Mountain features many other friends of Oberstâ€™s, including producer Jonathan Wilson, engineer Andy LeMaster, bassist Macey Taylor, multi-instrumentalist Blake Mills, and the Swedish sibling folk-rock vocal duo First Aid Kit. What started as exploratory demos with producer-musician Jonathan Wilson at his Fivestar Studios in the Echo Park neighborhood of Los Angeles, in a home Wilson rents from Oberst, became the first de facto album sessions. Returning to his native Omaha, Nebraska, Oberst kept rolling with the help of frequent collaborator, engineer, and friend Andy LeMaster at his own ARC Studios. Even more tracking followed in Omaha last November and December. Then Oberst and Wilson moved south to Blackbird Studio in Nashville.

â€œThis is a return to an earlier way I wrote,â€ Oberst says of the songs on Upside Down Mountain. â€œItâ€™s more intimate or personal, if you will. Even if all my songs come from the same place, you make different aesthetic decisions along the way. For me, language is a huge part of why I make music. Iâ€™m not the greatest guitar player or piano playerâ€”Iâ€™m not the greatest singer, eitherâ€”but I feel if I can come up with melodies I like that are fused with poetry Iâ€™m proud of, then thatâ€™s what I bring to the table. Thatâ€™s why Iâ€™m able to do this.â€

Prior to the album release, a limited edition 7â€ single will be released exclusively for Record Store Day (Saturday April 19). This special single will feature the album track â€˜Hundreds of Waysâ€™, along with album outtake â€˜Fast Friendsâ€™ on the B-side.