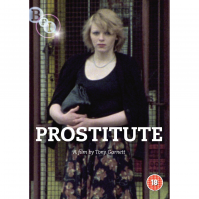 Tony Garnett, one of British television's most critically acclaimed figures, has been responsible for producing some of the most radical and controversial UK drama, and is associated with ground-breaking directors such as Ken Loach.

His directorial debut, Prostitute, is the tale of two women - Sandra (Eleanor Forsythe), an ambitious but naïve Birmingham working girl who moves to London with the hopes of securing wealthier patrons, and Louise (Kate Crutchley) her social worker friend who is fighting to change the antiquated and hypocritical prostitution laws. As both strive to achieve their goals, a cold dose of reality dashes their hopes, and the built-in biases against women in society are unmasked. This frank and controversial exposé is finally presented here fully uncut and uncensored.