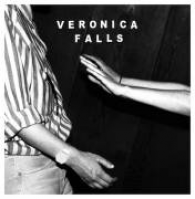 Waiting For Something To Happen

You may have had them tagged as goth-tinged pop fantasists, but with their much anticipated sophomore album “Waiting For Something to Happen”, Veronica Falls easily shrug off any notions of a difficult second album to create something that is easily more polished, more affecting, and more enduring than their peers would dream of making, and stake their claim as one of the most gloriously unpredictable and invaluable bands the UK has right now.

Recorded with Rory Attwell (Male Bonding, The Vaccines), “Waiting For Something to Happen” is a bold and deliciously assured leap forward which sees the quartet of Roxanne Clifford, Patrick Doyle, James Hoare and Marion Herbain easily throw off the tongue in cheek references to ghostly romances and suicides to elegantly distil the essence of an aimless twentysomething existence into a set of immaculately conceived and perfectly wrought pop songs.

Indeed, the emotional throughline, from the title down, is one of slowly coming to terms with the process of growing up and eventually learning to face adult responsibility, of leaving behind the safe haven of “driving late at night, I’ll let you listen to the music you like...everything’s alright” (as they sing on the dreamy, dewy-eyed first teaser “Teenage”), and then searching for a “shooting star to point me in the right direction” (“Shooting Star”). Far from retreading the playful atmosphere of the debut, the band here mine a much more rich, emotionally resonant vein, be it weariness with dead end social scenes (“So Tired”), or the fear of your peers leaving you behind before you’re ready (“Everybody’s Changing”).

Musically too, this album sees the band evolve into a more poised and confident pop entity, the melodies bolder and songs more muscular, as epitomised on spellbinding album opener “Tell Me”. So there are deliciously askew pop belters in the form of “Buried Alive” and “Everybody’s Changing”, but there are also achingly tender moments present too, from the touching love song “Broken Toy” (“I am broken too, a broken toy like you”), to the gentle reverie “Daniel”, which strips the track to its barest essentials – shimmering guitar lines and perfectly harmonised vocals sighing, “nobody needs to know what we know, nobody needs to go where we go” to perfectly heart rending effect.