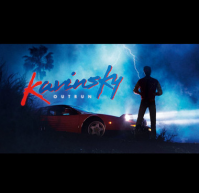 How could we talk about Kavinsky without evoking the movie that introduced his music to the general public ? Dazzling success of the independant film industry of the last couple of years, Drive is the kind of movies in which the soundtrack takes a front seat role. As in his previous realisations, Nicolas Winding Refn took great care, with the help of Cliff Martinez (former drummer of the Red Hot Chili Peppers), to select the tracks that would feature in his latest movie. It’s in this way he picked Nightcall for the opening scene, and we soon cannot tell anymore if the music responds to the picture or the contrary.
Deluxe vinyl includes :-
Limited numbered LP + Hardcover vinyl book glossy coated 321x 321mm + 2 printed cardboard inner sleeves
+ 16 pages booklet + 4 lobby cards 23 x 29 cm (like movie pics) out of 15 randomly inserted

There’s no need to point out that the world of Kavinsky and the atmosphere of Drive have a lot more in common. Highly influenced by the silver screen (he started his career as an actor, including in Quentin Dupieux’s Steak or Bouli Lanners’ Novorama), the musician explained in one of his rare interviews that image and narration are an integral part of his creative process. Thus, when he released his first EP « Teddy Boy » in 2006, the scene was already set : in a neo-noir Los Angeles, the character of Kavinsky perishes in a tragic car accident in 1986. Reimbodied into a zombie, the boy wanders at night tearing up the track at the wheel of a Ferrari Testarossa. Pursuing his girlfriend, he scoffs at the cops, helps old ladies to cross the street and beats up the bad guys in a John Carpenter-ish modern tale of love and loss in which Giorgio Moroder meets Terminator.

Before being revealed to the greatest audience through the success of Nightcall, Kavinsky released various EPs which aroused an enthousiastic suspense among the french electro music sphere. Remixed again and again by leading artists of the scene like Mr Oizo, Arpanet, A-Trak, Sebastian, Justice, Jackson or Breakbot, he was chosen by the Daft Punk to open their world tour Alive in 2007, alongside Sebastian, The Rapture and Klaxons. But their kinship doesn’t end there, as Guy-Manuel de Homem-Christo, half of the robots duo, engineered the production of the melancholic and hypnotic Nightcall, to which Lovefoxxx from the band CSS lend her voice in 2010. Kavinsky’s tracks featured many ads and video games, as Testarossa Autodrive in « GTA IV », Road Game for Mercedes-Benz and « Hitman Absolution » or Odd Look for BMW.

While the buzz surrounding Kavinsky is at its peak with 30 million views on Youtube for his biggest hit, his lifelong label Record Makers announced in november the imminent release of his first album « Outrun » to be launched in march 2013. A long-awaited records which promises to be packed with featurings.

The album features 13 tracks including 8 previously unreleased and some reworks. From the first notes, we can hear Paul Hahn (manager of Daft Punk) recounting an introduction to the adventures of Kavinsky. Warm and electric, Blizzard makes its entrance and sets the tone before allowing Protovision to take its place, which with its nervous and synthetic melody was the first excerpt of « Outrun » that whas released on an EP and whose videoclip came out in december as a teaser for the album. Then arrives Odd Look, the first vocal song of the record, which unveils a mysterious funky voice that can remind the groove of Marvin Gayer or Prince. It’s then Rampage‘s turn to take us with its menacing orchestral atmosphere ; after what comes the persuasive beat of Suburbia on which notorious Havoc from Mobb Deep lent his voice. The upgraded version of Testarossa Autodrive confirms the efficacity of this unstoppable melody, and it’s at this point we find Nightcall again, the famous ballad produced by Guy-Manuel from Daft Punk and featuring Lovefoxxx from CSS. Dead Cruiser arrives then, muscled yet melancholic, followed by Grand Canyon which takes us with its electrical ritournelle. The voice of Tyson, the new funk revelation from UK, transformed the instrumental First Blood into a génuine hit. The rythmic and melodious Road Game leads us to Endless, which gently closes this long-awaited revealing first opus, with as a conclusion a narrated epilogue by Paul Hahn again.