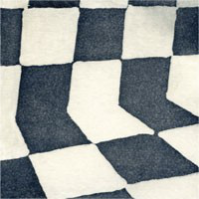 Ducktails, the increasingly less "solo" endeavour of Matt Mondanile, is set to release The Flower Lane, which is the project's fourth album and his first for Domino. Recorded and mixed over the summer of 2012 with Al Carlson (Peaking Lights, Oneohtrix Point Never), as Mondanile's hectic schedule as a concurrent member of Real Estate began to wind down after a year in support of their Domino debut album, Days, the ten track album will hit the streets on January 28th to be preceded by the single release of effervescent pop gem, ‘Letter of Intent’.Taking a tangential turn away from solo home-recording of past releases toward the more collaborative environment of the studio, Ducktails' Matt Mondanile roped in close friends and colleagues to make something more adventurous yet easy-going. The ten songs on The Flower Lane move across a range of expressive pop songs that are bright and expansive, but venture even further with forays into saxophone leads, synth lines and piano accompaniment that would have been at home on the early records of sophisticated guitar pop icons such as Aztec Camera and Prefab Sprout.With brooding seducers ‘Under Cover’, ‘The Flower Lane’ and ‘Sedan Magic’ along with a stunning cover of founding Clean/Chills member Peter Gutteridge's ‘Planet Phrom’, the ambient pop of The Flower Lane is, from start to finish, as spirited as the time these folks had recording it. Support came in many forms, from the backing of the New Jersey band Big Troubles to contributions from Daniel Lopatin (Oneohtrix Point Never), Joel Ford (Ford + Lopatin), Madeline Follin (Cults) and Sam Mehran (Outer Limitz), to name a few, The Flower Lane defies the cliché of "embracing the big studio" by successfully making the songs feel immediate on an emotional level after they've passed through the dozen other wizardly minds of the studio collaboration while still conveying the fun they had working together.

One of the standouts on The Flower Lane is the duet between Future Shuttle's Jessa Farkas and Big Trouble's Ian Drennan on ‘Letter of Intent’. As with Felt's ‘Primitive Painters’, where the contrasting voices of Lawrence Hayward and Cocteau Twin Elizabeth Fraser exchange pained verses or with Tom Petty's seductively plodding collaboration with former Eurythmic Dave Stewart on his synth-driven hit ‘Don't Come Around Here No More’, ‘Letter Of Intent’ is proof of the expanding range of Ducktails' song craft.