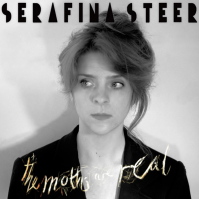 The Moths Are Real

Previous albums ’Cheap Demo Bad Science’ (2006, Static Caravan) and ‘Change Is Good, Change Is Good’ (Static Caravan) which Jarvis cited as his favourite album of 2010, firmly established Serafina as an emerging talent to watch, but this record sees her ideas developed and grown into something truly special.

Unassuming, yet mesmerising, this album confirms the
arrival of a singular talent, a breath-taking voice and an utterly unique lyricist.