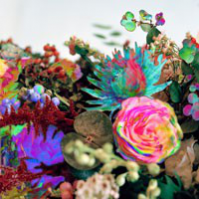 Darkstar will release their second album, News from Nowhere, in February 2013 via Warp Records.

Starting off in 2007 as the duo of James Young and Aiden Whalley, Darkstar took on James Buttery as a vocalist for their 2010 debut LP, North. Taking the sound design of contemporary UK electronic music and infusing it with more traditional song structures and a synth-pop feel, North signalled a more open-ended music policy for Hyperdub and makes their recent signing to Warp a logical next step. The group wrote its follow-up in the West Yorkshire countryside and finished it at producer Richard Formby's analog-centric studio in Leeds. According to the band, News from Nowhere is a different beast from North: "It's somewhat brighter in mood, but deeper in feeling and intention… it's much more rhythmic and fluid. It moves quicker.