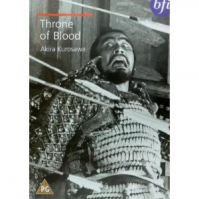 A champion of illumination and experimental shading, Kurosawa brings his unerring eye for indelible images to Shakespeare in this 1957 adaptation of Macbeth. By changing the locale from Birnam Wood to 16th-century Japan, Kurosawa makes an oddball argument for the trans-historicity of Shakespeare's narrative; and indeed, stripped to the bare mechanics of the plot, the tale of cut-throat ambition rewarded (and thwarted) feels infinitely adaptable. What's lost in the translation, of course, is the force and beauty of the language--much of the script of Throne of Blood is maddeningly repetitive or superfluous--but striking visual images (including the surreal Cobweb Forest and some extremely artful gore) replace the sublime poetry. Toshiro Mifune is theatrically intense as Washizu, the samurai fated to betray his friend and master in exchange for the prestige of nobility; he portrays the ill-fated warrior with a passion bordering on violence, and a barely concealed conviviality. Somewhat less successful is Isuzu Yamada as Washizu's scheming wife; her poise and creepy impassivity, chilling at first, soon grows tedious. Kurosawa himself is the star of the show, though, and his masterful use of black-and-white contrast--not to mention his steady, dramatic hand with a battle scene--keeps the proceedings thrilling. A must-see for fans of Japanese cinema, as well as all you devotees of samurai weapons and armour.