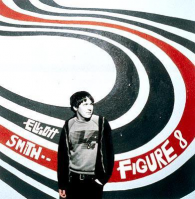 Despite the fact that by the year 2000 Smith was in a dark place, suffering from depression and contemplating suicide, “Figure 8” is a really uplifting album. Partially recorded at the world famous Abbey Road studios in London and heavily influenced by The Beatles, the album is considered by many as being sonic perfection due to its “sweeping kaleidoscope of layered instruments and sonic textures”.

The photograph adorning the front cover of this 2LP set boasts a clean and healthy looking Elliott Smith standing outside the Solutions Audio studio in LA which has become something of a mecca for the legions of fans who have discovered his music since his untimely death in October 2003.

As with all Back 2 Black vinyl re-issues they’re faithful to the original vinyl release and they’re all pressed on 180gram vinyl and come complete with a Digital Download for the album.