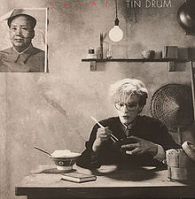 Tin Drum continued the band's now developed use of electronic elements coupled with traditional instrumentation, but leans far more towards Far Eastern influences than any of their previous albums. Guitarist Rob Dean had left the band by this point, with vocalist David Sylvian taking on his duties, which had become largely surplus to requirements in terms of their musical direction.