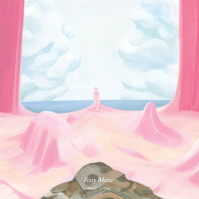 Toronto, 2014 – Toronto's Chris A. Cummings, a.k.a. Marker Starling (formerly Mantler), is set to release his new album, Rosy Maze. Written and played mostly on a Wurlitzer electric piano and produced by longtime associate Zack G, the new record is a departure from previous Mantler releases, as it features Jay Anderson (drums) and Matt McLaren (bass) on all songs but one, making it truly a band record. "The songs we recorded in the first session were older songs of mine - 'I Guarantee You a Good Time' and 'Uphill Battle' were written between 1999 and 2001; 'Eyelet' was initially intended for a solo Wurlitzer EP in 2006 that was never finished; 'Searching for a Song' was written in 2006 for the Friends in Bellwoods compilation, for which a different version was recorded; and 'Painful Spring' was written in 2008," said Cummings. "Between February and July 2010, I had a great deal of inspiration and wrote 'Hue and Cry,' 'Husbands' and 'Only Speak Your Name,' and completed three songs, 'Flower of Laughter,' 'Bright as Day' and 'Heed the Call.' My wife and I were expecting a baby daughter in July, and the feeling that swept me up during those months - happiness, hopefulness - poured through me into those songs." Two key members of Anderson and McLaren's band, Steamboat - Nick Taylor (guitar) and Christopher Sandes (organ) - are featured on Rosy Maze, which also showcases some ambitious string and horn arrangements. Toronto stalwarts Michael Davidson and Jeremy Strachan play vibraphone and saxophones/flutes (including bass and alto flute) respectively, the latter also providing the delicate string arrangement for the album's most epic track, "Heed the Call." Longtime collaborator Ryan Driver contributed additional flute playing while Felicity Williams created the vocal arrangements for three male voices (Thom Gill, Ben Gunning and Alex Samaras). During the album's four-year production period, Cummings lost a close friend, longtime backing singer Dennis Frey, who passed away in December 2012, and whose voice is included on the record via a 1999 cassette demo. "My previous record, Monody, was the first one to feature a large number of additional musicians; my prior records were mostly solo affairs. With my third record, Landau, I wanted to make a complete departure from my previous output by making a non-lo-fi record, and also by composing it electronically, and I was able to bring my songwriting up to a more sophisticated level as a result. After Monody, which was a mixed band/solo/electronic record, I wanted to make a 'pure' band record with drums and bass throughout, but at the same time keeping the kind of pastoral feeling of my previous work." Rosy Maze is the latest in a series of records in the category-defying area of music that has been Cummings' stock-in-trade since 2000, and which has been dubbed "outsider easy listening" by Toronto's NOW Magazine.