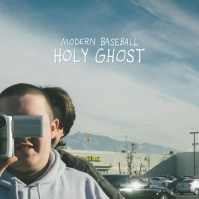 In just a few short years, Modern Baseball have gone from college freshman self-recording their first record to a worldwide phenomenon. Somehow, it feels like just the beginning. In 2016, Modern Baseball will release their new album Holy Ghost. The first album recorded by someone other than the band themselves, Modern Baseball enlisted Joe Reinhart (Hop Along, Joyce Manor) at Headroom Studios in Philadelphia to help refine their sound. Holy Ghost shows off the band#s sonic growth, adding in new influences ranging from The Killers to Pedro The Lion. In a tight 28 minutes, Holy Ghost covers an impressive emotional range. Throughout the process, co-songwriters Jacob Ewald and Brendan Lukens found themselves in different places writing different songs so they split the record in half. The record kicks off with six songs from Ewald and ends with five from Lukens. What they ended up with was a complete record of the past two years # the highs alongside the lows, tales from the road and glorious days at home alongside songs of heartbreak and personal struggle. The highly anticipated album brings a newfound weight to the band, as they continue to grow emotionally and musically with each new release. 2016 looks to launch the band into even greater things, bringing their fans along as they become a slightly older, slightly more profound version of Modern Baseball.