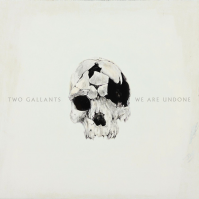 Two Gallants' Adam Stephens (guitar, harmonica, keyboard and vocals) and Tyson Vogel (drums, guitar and vocals) spent one month recording We Are Undone with Karl Derfler (Tom Waits) at Panoramic House in Northern California. Of the title track, Stephens says "'We Are Undone' was, without being too blunt about it, trying to make sense of this unending pressure to acquire and consume, and usually as conspicuously as possible, that has taken a hold of our culture."

Stephens and Vogel started making music together at the age of 12 and began performing around San Francisco as Two Gallants in 2002 when they were both 21. Alive Records released the duo's debut album, The Throes, in 2004 which Pitchfork said "taps into a rusty vein swollen with grief, heartache and violent desperation." Both Two Gallants' 2006 album What the Toll Tells and 2007 EP The Scenery of Farewell were released on Saddle Creek. The band have played countless festivals around the world including Bonnaroo, Outside Lands, Latitude, Paleo, Roskilde and Perth Festival, among others. Two Gallants will be embarking on an extensive US and European tour throughout February and March 2015.