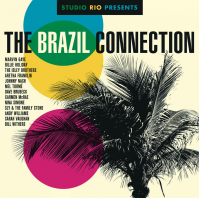 â€˜Studio Rio Presents: The Brazil Connectionâ€™ is a lively and seamless blend of samba and bossa nova grooves with some of the most iconic American vocal performances from Billie Holiday, Marvin Gaye, The Isley Brothers, Aretha Franklin, and others. The Brazil Connection is the brainchild of music producers Frank and Christian Berman, who had previously explored such distinct cultures for Rhythms Del Mundo, an album gathering acclaimed artists like Sting and Coldplay with the legendary Buena Vista Social Club.
For The Brazil Connection, the Berman Brothers used original multi-track masters and an all-new, state-of-the-art separation technology to extract the classic vocal performances. Once in hand, they melded the newly isolated vocals with brand-new, authentically arranged backing tracks from an all-star cast of Brazilian musical pioneers from the bossa nova and samba genres, including Latin Grammy Lifetime Achievement Award winner Roberto Menescal and Brazilian musical legend, Marcos Valle. The result is 11 tracks that capture the spirit of Brazilian music and style while embodying the slogan of the 2014 FIFA World Cup in Brazil: â€œAll in one rhythm.â€ The Brazil Connection is a vibrant, inspired reinvention of timeless performances that at once feels entirely new and instantly familiar.