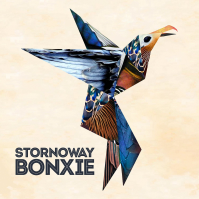 Indie-folk ensemble Stornoway return in 2015 with their forthcoming third album Bonxie. For the first time the band enlisted a producer to captain the ship and the man in charge was none other than Gil Norton. Noted for his work with Pixies, Foo Fighters, Twin Atlantic, etc. Gil certainly rocked Stornoways world and shook them out of their comfort zones; helping them cut to the chase, sizing up the new songs and shaping them with raptor precision. Joining Gil and Stornoway in the studio was none other than Craig Potter (Elbow) who mixed the track Man on Wire. Whilst Stornoways second album Tales From Terra Firma was concerned with very personal stories: lifes (and deaths) big questions, Bonxie is far more outward looking. It is infused with a humanistic ideal; a sense of humility and wonderment for the forces of nature, a desire and need for mutual regard and for a respect towards each other and the environment. Each song on Bonxie is a facet of the album which opens up like an origami bird. It is a construction of nature by humans but each song unfolds as a unique species, shape and call.