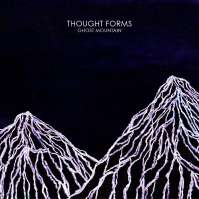 Thought Forms release their new album Ghost Mountain on Invada Records on February 25th preceded week earlier by a 7 single Only Hollow which has now been added to BBC 6 playlist. It takes all of the first 80 seconds of Bristol trio Thought Forms second album, Ghost Mountain, to realise that this is a group who have moved on substantially from their debut of three years ago. Indeed, if their self-titled debut in 2009 was about finding the dynamic limits of their atmospheric sound, gently prodding and probing varying elements, then the huge great slab of guitar that greets you instantly on their follow-up roars with the confidence of a band who ve found their level from which to fully explore their creative expression. Though the group have fans in Portishead, don t allow the link to act as any indication of their sound. The album veers between two opposites, from brisk, scuzzy American garage-rock influenced numbers to brutal, anguished noise constructions of ethereal doom, where it feels like they re tapping into a similar dark psyche to groups like Godspeed You! Black Emperor and Circle. With a psych slant too informing tracks like Afon and Burn Me Clean where vocals are almost as though a ritualistic call to on high the scope of Ghost Mountain s sonic terrain is vast, the result of a varied approach to song writing where wholes form out of group jams in the case of Burn Me Clean from an improvised set supporting Master Musicians Of Bukkake or from the chrysalis of an idea presented by just one of the trio. It s a clear move away from their debut album, though retaining the group s penchant for creating vast atmospheres. Only Hollow is a tip of the cap to My Bloody Valentine s Only Shallow . Then there s O , called that because of the shape of the letter, the group using it to represent what they call a circle of negativity . Negativity would suggest a bleakness to this album, and whilst in much of Ghost Mountain s fire and brimstone there is plenty that could be construed as despair, the abrasion in it suggests something more conflicted; a battle between shades of dark and light, universal but potent battles between love and hate, of hope and loss. When flung together with the power that Thought Forms has, it makes for a quite formidable proposition.